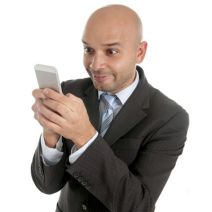 When it comes to challenges, there’s no better place to turn to than the Internet. However, the Internet is also saturated with useless, time-wasting videos and articles that are meant to stimulate the mind and destroy boredom. In the face of all of this media, a lone CollegeHumor video challenges a user to endure boredom for a measly three minutes.

This “boring” video is more of an analysis of the way the human mind has developed under the grueling conditions of continuous stimulation. The video argues that, while surfing the Internet, the average user will indefinitely choose entertainment over more productive alternatives (like actually doing work). This is because over a decade of Internet use has fostered an attitude that we don’t necessarily have to be bored, which in turn has allowed people to justify not reading through an entire article. Hence, the term, “tl;dr” (Too long, didn’t read).

Can You Finish This Article?
By now, we’ve probably lost at least half of you. For those of you who are still with us, don’t take it personally, but we know that most of you probably won't finish this article. According to Slate, which performed a study concerning their web traffic and reader statistics, about five percent of all those engaged by Slate’s articles couldn’t even be bothered to scroll down the page. This means that they didn’t see anything at all within the article, and instead went to another page.

Thankfully, the majority of visitors scroll down to about the halfway point. Still, this doesn’t necessarily mean that they read the whole article. They might have only read half of it, and then chose to share it over social media because they found the premise interesting. If this is the case, they won’t have read the whole article, and the people who click on it through social media probably won’t, either. Thus, there will be a whole slew of people who only have a vague understanding of the article’s content.

Of course, there’s also the huge influence that media has on the number of people who scroll through the entire article. Most people can’t be bothered to finish the article unless there’s something visually stimulating in it, like videos or pictures. There isn’t even a guarantee that those who scroll through all of the article have even read it. For all we know, people could scroll down the page to see if anything catches their eye, then leave afterward. These trends use the assumption that the web article is roughly 2000 pixels long (the length of a typical web article, roughly two pages of text or 1,000 words single-spaced).

If You’re Still with Us, Congratulations
If you’ve made it this far, you’re one of the few who would take the time to read the whole article. You chose to take some time out of your schedule to read this entire article, and we appreciate that. In a world where we never have to be bored unless we choose to be, it’s almost as if people are simply looking to curb their hunger for entertainment rather than trying to read something intellectual.

This natural time-wasting mindset can be detrimental to the business owner. The Internet makes it easier than ever to be distracted and wander in meme-land for several hours a week. By taking advantage of productivity best practices from Heart of Texas Network Consultants, you can minimize mental downtime in the office and truly allow your online practices to flourish. Give us a call at (254) 848-7100 to learn more.