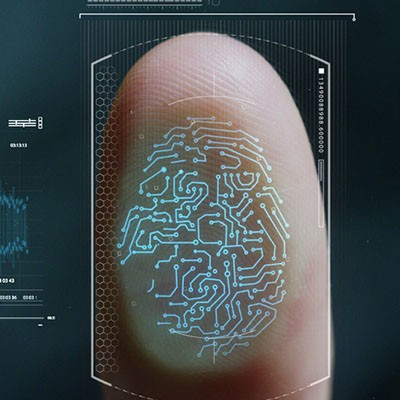 It’s a familiar scene from many science fiction properties: a person approaches a locked door. They unlock it, but rather than using a key, a red beam scans their eye to confirm their identity and permit them access. The thing is, this and similar biometric authentication technologies are likely to begin appearing in real-world businesses sooner than later. Let’s discuss:

Biometrics are a form of authentication that, instead of using a password or key code, leverage some physical attribute or qualifier. These could include fingerprints, voice patterns, and even the rhythm that a person uses to type. Not only are they easier for a user to leverage, they can be compounded, enhancing security as well as supporting many other business practices.

Let’s dive further into the kinds of biometrics that can be leveraged by a business (although not all of them are practical to do so as of yet).

There are also behavioral identifiers that newer forms of biometric authentication are able to pick up on. These methods are largely still in development.

Reliability (and Risks) of Biometrics

As it currently stands, biometric authentication is a problematic technology, simply because the ‘key’--the user--can be inconsistent. Voices can sound different for a variety of reasons, and fashion choices can easily change one’s appearance enough to frustrate a biometric system. Imagine not being able to access the office because you experimented with a new haircut or picked up a fashionable new pair of spectacles! However, this doesn’t mean that there aren’t ways to cheat these systems. Photos can be effective, as can recordings of one’s voice.

This is why most experts suggest that, if biometric authentication is to be used, multiple factors are taken into account.

Security is a Major Concern

Of course, this kind of data will also need to be heavily protected for the sake of the user’s privacy. Furthermore, it isn’t as though these are the kinds of credentials that can be easily changed. For these reasons alone, it will likely be quite a while before biometrics truly become the norm.

One thing is for sure, you need to ensure that your business’ data is secure. Heart of Texas Network Consultants has the solutions that can help. Give us a call at (254) 848-7100 for more information.

Facebook Twitter LinkedIn
Tags:
Security Gadgets Innovation
Checking Up on Medical IT in 2019
Tip of the Week: What To Do With a Wet Smartphone