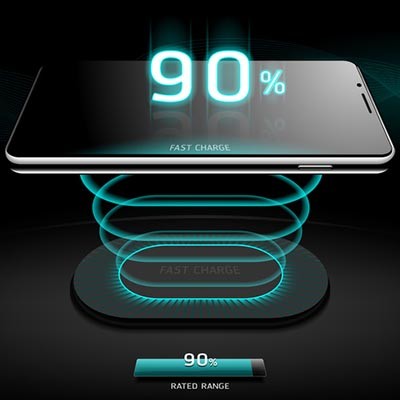 How many times have you sighed about plugging your phone in, reaching behind your desk to get to the outlet? All of this could change with the addition of near-field induction charging, more commonly known as wireless charging. We’ll review what modern wireless charging is capable of, as well as what kind of obstacles could be avoided through its use.

It’s likely that you’ve already used wireless charging. The Qi wireless platform became the standard for wireless charging, and it has been used in both Apple and Android devices since its inception. It made the jump from 2.5W to 15W delivery. Wireless charging’s convenience has made it a mainstay in certain sectors. It’s a great solution to include near workstations and nightstands, as well as public places like restaurants. There is no evidence suggesting that it has a widespread negative influence on the battery’s lifespan, meaning that there’s no real reason not to have it; this just means that it will get people using their applications and mobile devices more and more.

For example, the Wireless Power Consortium--the developers of Qi charging--has been developing large-form-factor charging pads for the kitchen to provide power to appliances. In the realm of businesses, there is an investigation going on into decreasing constraints on wireless charging power.

Will Wireless Charging Be Possible at a Distance?

Some manufacturers have developed a means to send power over a short distance, so whether or not this technology is possible is yet to be determined--especially with efficiency being taken into consideration. Once the power source and receiving device are far enough apart, the charge being delivered falls in terms of what would be practical to send to the receiving device. In other words, when it reaches its destination, it retains about ten percent of the power source, meaning that charging is, quite simply, not efficient.

Resolving this issue is something that is extremely unsafe, as well. True wireless charging achieves about ten percent efficiency compared to the Qi’s near-field rates of 75 percent efficiency, as well as a wired charge’s 85 percent efficiency. It makes it hard to see how such a long-distance charge could be worth it--at least with today’s technology constraints.

What are your thoughts on this wireless technology? Let us know in the comments and be sure to subscribe for more think pieces and informational discussions about modern technology.