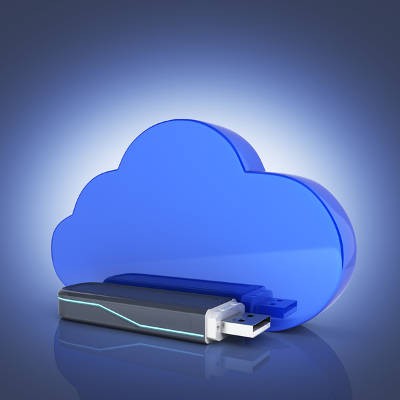 When it comes to quick and easy document sharing, most people will reach for a USB drive without a second thought. However, you may want to reconsider and use the cloud instead. Let’s explore why.

The Origins of Our Data Storage Options
NAND flash memory, the method of data storage on a flash drive, continuously dropped in price throughout the 1990s. By the time the new millennium rolled around, a Singaporean company called Trek 2000 International released the first commercially available USB flash drive. Trek 2000’s ThumbDrive was released early in the year, soon followed in the United States by IBM’s DiskOnKey.

Cloud storage’s roots can be traced back to 1969, when the concept was first conceived of by J.C.R. Licklider. Licklider had dreamt up a storage system that existed online, accessible on a global scale through an Internet connection. Of course, putting this idea into action was impossible until the technology existed to support it, but its capabilities were quickly adopted once it came into being. Google and Amazon were among the first to provide their users with utilities, like data storage, via cloud technology.

Pitting Flash Storage Against the Cloud
To be fair, this is an incredibly one-sided ‘fight.’ When all\'s said and done, the lone advantage of a USB is that it allows a user to share files independent of an Internet connection. Other than that, the only real benefit they offer is convenience, but even that is shadowed by the convenience of the cloud and its other features.

For starters, the cloud is secured against threats, with AES-256 encryption protecting it along with multi-factor authentication access control solutions. Your data is also backed up when it’s stored in the cloud, offering considerably more security than a USB drive could. As a result, the cloud is a superior option before one even considers its improvements in utility over a USB drive.

Over a secure connection, the cloud allows you to use your Internet connection to access and edit your stored documents from any device. Furthermore, the cloud can benefit your ability to collaborate with other people, as you can share access to a document by sharing a link instead of handing over a USB (and entrusting the data within to the recipient). This also allows multiple users to collaborate on the document at the same time, something a USB simply couldn’t do.

There was once a time that a USB drive might have been a handy (if risky) means of data storage. Now, the cloud holds that distinction. If your business is ready to embrace the next step in data storage and management, reach out to Heart of Texas Network Consultants. Your move to the cloud is only a call to (254) 848-7100 away.