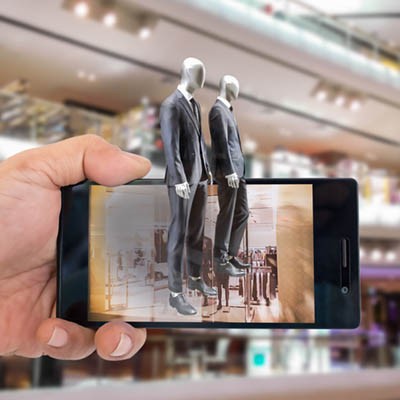 You may have heard the term augmented reality, but you may be surprised to learn just how much A.R. you already use in your life. For the majority of people who use a smartphone, A.R. applications (like a camera app) are already used en masse. Today, we’ll take a look at augmented reality and how it is going to be used in the future.

Today’s A.R.
As was stated above, most people who use a smartphone today have used some sort of augmented reality technology. In an A.R. application, a virtual (and often controllable) image is layered over real-world objects caught through the camera on the device. The overlay is simulated simultaneously with the input received over the Internet and through the camera. A.R. increases user engagement as they need to interact directly with the superimposed images.

Developers are trying to harness the potential power of the technology by developing applications that are intuitive and useful. There have already been some pretty successful A.R. rollouts, like the furniture app, Augment, and the ever-popular A.R. game Pokemon Go. Even A.R. browsers have been developed. Argon4 with its Javascript framework makes it easier to add augmented content to web applications.

Tomorrow's A.R.
While there haven’t been a lot of applications developed to completion so far, the future of augmented reality looks extremely bright. A.R. technology could be most useful in creating tutorials on how to do certain tasks. Anything that you need a step-by-step guide for could be made simpler through the use of A.R. For example, if you need to troubleshoot relatively simple maintenance to your car, an A.R. app can be developed to map everything under your car’s hood, and give you a tutorial on how to replace spark plugs, fluids, and other simple tasks that often cost car-owners thousands of dollars every year. Similar applications could be rolled out in schools in the near future, providing massive benefits for educators and students, alike.

Other apps that are currently in development include:

Augmented reality hasn’t hit it big just yet, but don’t be surprised if the technology is omnipresent in the very near future. At Heart of Texas Network Consultants we keep up on tomorrow’s top technologies so that we can provide the best technology services for our clients. If you would like more information about augmented reality, or any other new and emerging technology, reach out to us today at (254) 848-7100.

Facebook Twitter LinkedIn
Tags:
Smartphones Augmented Reality Applications
Getting to Know technology: Software as a Service
Save Money, Be Spied On?